Today, April 28th 2013, I started my performance at Red Bull Music Academy, Hyper Current Living. The brief of the performance is as follows –

"Hyper-Current Living is a performance by Ryder Ripps in which he "lives" and "works" at Red Bull Music Academy between April 28th and May 5th 2013 – he'll be drinking Red Bull and creating digital stuff at hyper speed. In the stream, our output is valued by its proliferation and its likes and favs – what incentive is there to spend 4 years writing a novel if it will just be a link in a stream lasting a few hours? The piece brings this trait into light by designating a time and space to the creation of such fragmented, short interactions native to social media."

The performance, and its four individual components, is currently live at http://hypercurrentliving.com

Here is a video walk through of the space –

Convincing the folks at Red Bull Music Academy to get behind this was not an easy task. Ironically, the more the piece had to do with Red Bull as a liquid/product, the more weary they were to give me the green light. I think originally it seemed strange to them that I would want to unabashedly integrate the brand so heavily into my art – they thought maybe I was doing it because i felt somehow obligated to, or perhaps it was i was being sarcastic/making fun of the brand. Neither of which are the case. The piece to me is mainly about how our consciousness of "the stream" (social media stream) effects the things we make. As a creative person, who's output is valued through a collective qualitative judgement, the stream offers us the ability to immediately put something into a type of "market place" of culture. (before the internet you had to give a concert, get published etc. to do this) This being the case, we are often socially satiated by the likes, favs and retweets a post gets – these are the things that seemingly carry with them cultural value. Within such a value system I wonder what difference there is between something that takes 1 year to make and gets 50 likes on Vs. something that takes a few seconds and gets the same amount of likes. The performance touches on this in a very litteral way, proudly letting an "idea" be the ends of the production line.. The "ideas" are posted publicly to twitter, with the purpose of gaining attention, get faved and ultimately making me feel loved.. the ideas end there, and evaporate into the stream.

Red Bull as a substance aids this modern mode of production. Drink a Red Bull, feel alert, finish what you can finish in 4 hours, turn it in. "Conceptual art as a sport", a phrase i wanna coin, considers the stamina and endurance that goes into taking ideas/art seriously and trying to make a living from them/it. Maybe slamming a Red Bull and doing a base jump is not too different from slamming a Red Bull and making art (something i've observed my friend Ryan Trecartin do many times ;)

an app that randomly sexts someone on your phone #hypercurrentliving

dog swap, a show where people trade dogs for a few days #hypercurrentliving

I designed an outfit for the performance check it out –

So far, i have felt very productive in this space, and its not only the sugar and caffeine. I think having this live updating interface right next to my face really seems to be a source of motivation.. its like looking in the mirror all day. 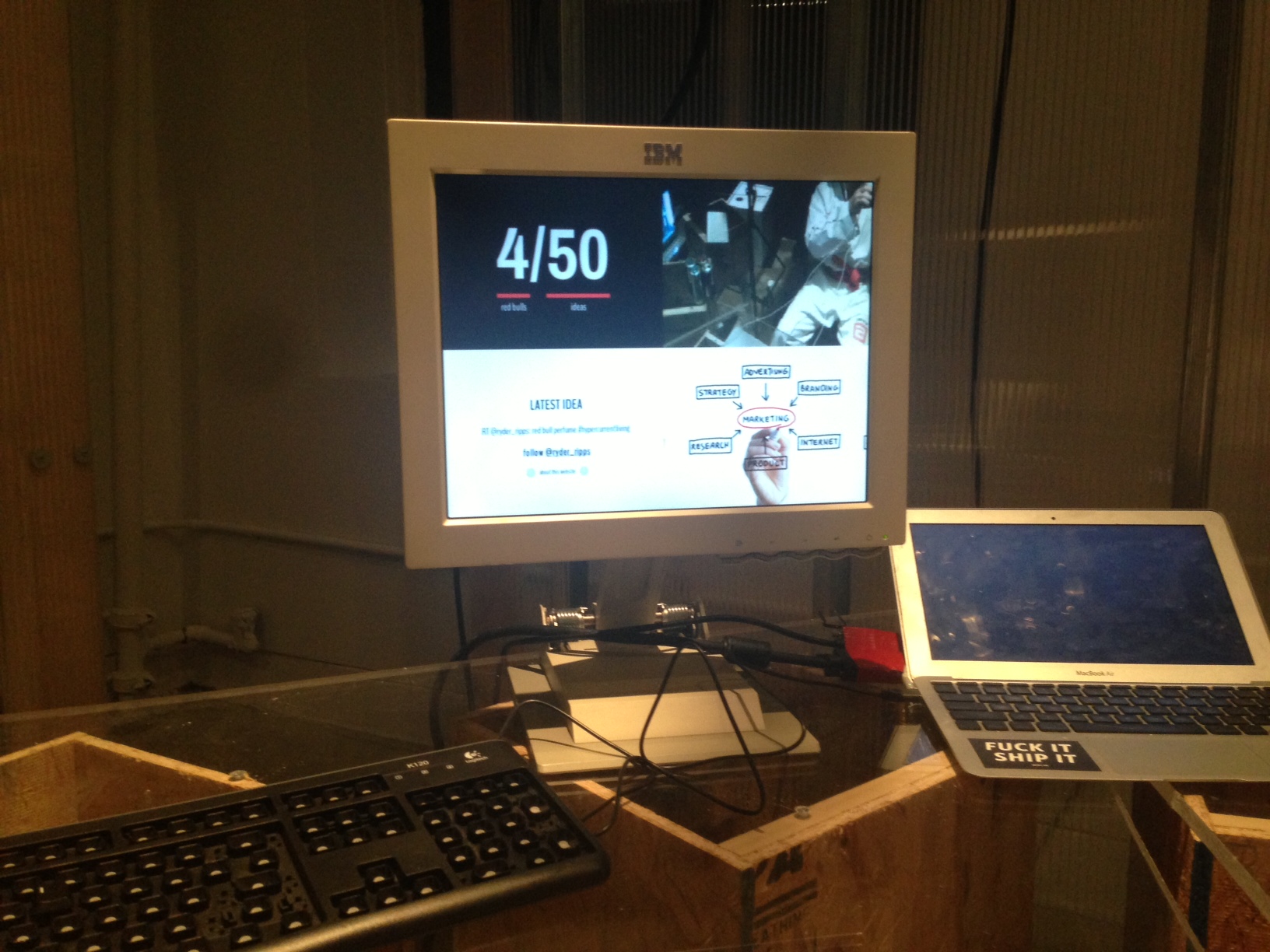 I will post an update at the end of the piece discussing the experience further. Thanks for reading.
Tags: hyper current living, performance art, rbma, red bull
Subscribe